Are you wondering if you are from the Hebrew Tribes of Israel? Do you have Jewish ancestors but are unsure if you are Jewish?

“Our J1B line, is found among both Spanish and Eastern European Jews who have a claim to being Cohanim.

A
fter the Assyrians conquered Israel in 722 BCE, the 10 northern
tribes were lost  but presumably since  those tribes descended from Jacob they should all have a Y chromosome both similar to Jacobs and of course some alert to other men from the Middle East. This is even true for the R1B’s  you mentioned.

They are all historical to the Middle East.”
Bennett Greenspan Genealogist / CEO FTDNA

So the Merrick R1b1a2 line is likely to be cousins to the J1 and J2 Cohanim line of Levi, and also sons of Jacob. As genetic genealogy becomes more a part of the landscape of how we search for our roots, the pattern of where and who we came from will emerge, showing us the lost tribes of Israel and the close relationships of our ancestors

Oba 1:20 And the
captivity of this host of the children of Israel shall possess that of the
Canaanites,

even unto
Zarephath; and the captivity of Jerusalem, which is in
Sepharad, shall possess the
cities of the south.
Oba 1:21 And saviours shall come up on mount Zion to judge the mount of
Esau; and the kingdom shall be YHWH’s

WHO ARE THE SEPHARDI?

In 1492 the Spanish Inquisition drove many European Jews out along with other members of the Hebrew Nation tribes into other lands.

Many moved to the new world and came to settle in the Islands off the southeast coast of the United States. Some went to England

and other countries and latter moved into South America, Mexico, and the Southern United States.

Today we have the technology to test DNA and determine who the Sepharad or Sephardic Hebrews are. Just read this exert from

Dr. Sanchez discovered that the pebble of dough was found in the Torah and the Jewish traditions as an offering for the priests. This along with other recent DNA discoveries lead many to find out that they are from the lost tribes of Israel. Genetic Scientists believe that there is about 60 to 70
million Hebrew Tribal members who do not yet know who they are or where their family came from.

ARE YOU SUPPOSED TO BE A PART OF BIBLICAL PROPHESY ?

Every family passes on the known history of it’s origins. If you ask they will say I’m Greek or Welsh, Italian and Jewish. But Dr Merrick discovered
that where his fathers had come from was Wales. Yet some inner drawing spirit lead him to a more Hebrew way of worship. What Dan discovered and how amazing this revelation was to become in his life is explained on the pages of this book. Technical DNA data included on the rare R1b1a2 Hebrew family lines as well as how recent science has opened the

doors to find out who and where we really came from. 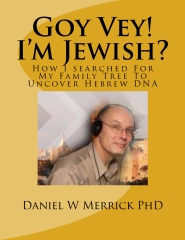 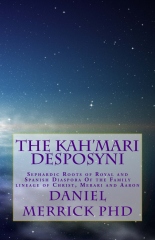 GET YOUR OWN DNA TESTED AND
SEE WHERE YOU COME FROM!

Click MERRICK DNA in the main menu and go to order DNA test.

*All DNA orders are
subject to the rules and regulations of FTDNA and their TOS / Unser agreements.
Any additional testing or lab work

after the initial test
is at your own expense. Proceeds and profits of cost of testing is donated in
full to CYMG MerrickFoundation.org

501 (C) 3 nonprofit
charity. Your donation and cost of testing will help aid in research and help
those in need through the CYMG

community and
spiritual services offered to the Jewish and Israeli people through their
ministries and associated services. By ordering

this service and
testing you agree to comply and abide by the rules and legal terms as addressed
on the FTDNA and RDJC, Inc. web sites.

certificate which may
vary depending on the type of testing that you elect to choose for your DNA
sample. Additional testing direct

on FTDNA is subject to
their fees and or requirement. Void where prohibited by law, contributions to
charity vary with product types.